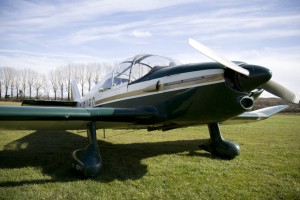 Loss of medical forces the sale of my share in this classic Jodel designed 4 seat tail dragger. Fabulous aeroplane with sparkling handling, she’ll carry four adults and cruises at 110-115 knots.

She’s a world traveller and has a fascinating history, the log book shows trips up to the Arctic Circle and down to the Gold Coast – facilitated by the 1000nm extended range tank. The range is certainly more than mine! Everyone who flies this rare aeroplane compliments her on her flying characteristics. Settle in to the leather seats, close the canopy, there’s bags of room and the O-320 (changed March 2012) is plenty to haul her into the sky. One up you’ll be shocked at how fast she climbs, four up it’s still a respectable rate.

Back in the day, there was little to touch the DR-250 – “The 250 proved very competative in the Sicile racings, securing the first seven positions in the rankings, Robin as always firmly on the number one spot.” [http://www.jodel.com/index.asp?p=dr200]

Oaksey Park in Wiltshire is a fabulous grass strip, well drained and plenty long enough. Bravo Oscar has been hangared there for many years now. Fuel, maintenance and a club house are on site and the hangars hold many interesting aeroplanes with friendly owners.

The group has been very stable over the years, generally none want to give up their share unless forced to. Once you’ve flown a DR-250 you tend to find other 4 seaters a bit mushy. Yes you need to be able to handle a tail dragger, but she’s relatively benign and the skill is fun to obtain. The satisfaction of landing a tail dragger well exceeds any nose wheel landing I’ve done. The lack of nose wheel probably gives us a couple of knots in the cruise too. So, more skill, faster cruise, what could be better?

What does this gorgeous aeroplane cost? We each pay £75 a month for fixed costs (hangar, insurance etc) and £30 per hour dry. You can choose to burn anything between 25 and 30l/hr. The engine fund is being rebuilt after the swap but we fill it at the right rate – there was no whip round needed for the last engine change.

The hull is insured for £40k, all realistic offers considered – bravo.oscar@pteron.org